It has recently become clear that “negative” emissions technologies will likely prove a critical component for preventing climate change. Take, for example, the following sentence from Chapter 6 of the IPCC’s Working Group 3 latest Assessment Report on Climate Change:

“The large majority of scenarios produced in the literature that reach roughly 450 ppm CO2eq by 2100 are characterized by concentration overshoot facilitated by the deployment of carbon dioxide removal (CDR) technologies.” 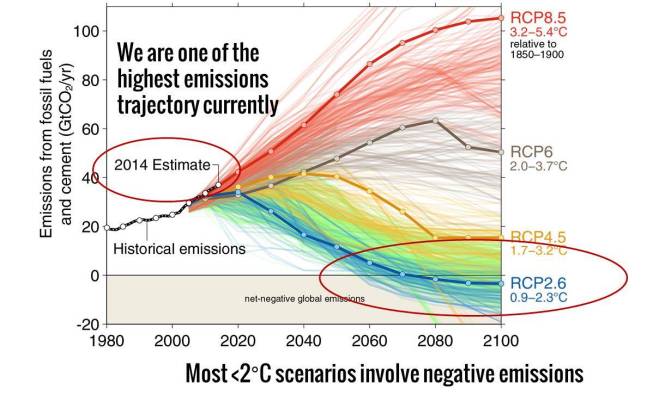 Above: the majority of the scenarios that keep the planet below 2 degrees C of warming (blue line) involve billion+ tonne scale deployments of negative emissions AND full decarbonization of the economy by the end of the century [source]. 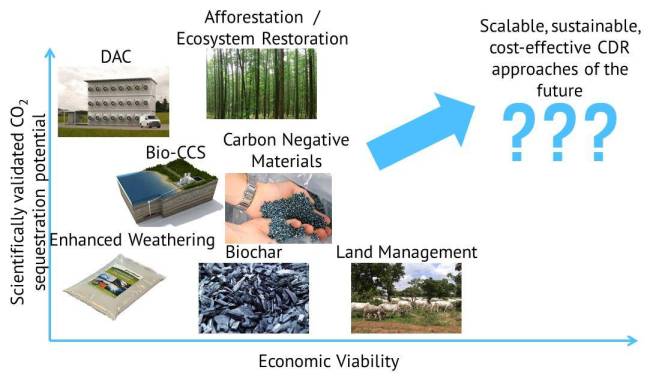 Above: lots of CDR approaches are under development, but none have clearly demonstrated the potential to provide negative emissions at the billion+ tonne scale in a sustainable and economically viable way.

What’s more, CDR technologies will require significant amounts of investment not just in R&D but also in markets to support these technologies once they mature. And government agencies, philanthropies, and private businesses alike are failing to make these necessary investments today. 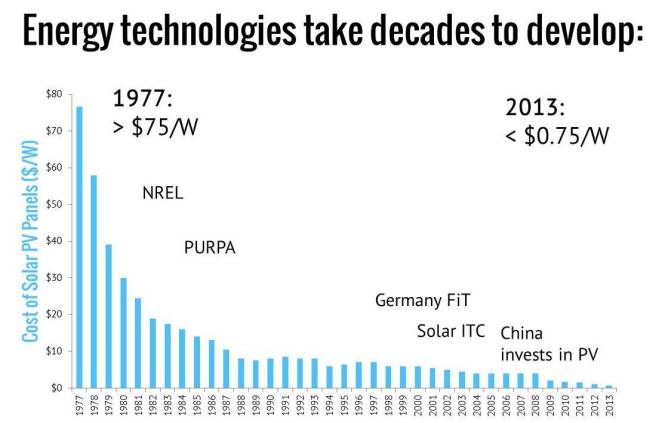 Above: Solar PV is just now beginning to be cost competitive with fossil energy — its development has taken decades of R&D for both technologies and markets. Source: Bloomberg New Energy Finance.

So how might we remedy this market failure and kickstart the development of CDR technologies?

One way would be to create an “ARPA-C”, or an Advanced Research Project Agency for Carbon. Right now, the private sector cannot find investment cases for CDR R&D, despite the fact that such investments would also generate immense social benefits — making the CDR field ideal for publicly-funded applied R&D. If an ARPA-C could fund CDR projects that result in technology cost reductions, advances in innovative business models, and better measurement and verification tools for would-be carbon removers, it could set the stage for follow-on investment by private sector companies to bring the CDR field to scale.

A new ARPA-C would also be critical for giving the CDR field much needed boost in awareness. Right now existing ARPA agencies (including DARPA and ARPA-E) could fund a number of various CDR projects. But none of these existing agencies currently have the mandate to fund the full spectrum of CDR approaches that have been proposed (spanning the energy, agriculture, natural resources, manufacturing, and other sectors). Take ARPA-E’s mandate, for example:

Thinking about CDR beyond just the energy sector is critical for the field to develop effectively — and a dedicated ARPA-C would demonstrate the need to think about carbon removal in as systematic a manner as possible.

An ARPA-C wouldn’t be without its challenges, however. Most importantly, ARPA-C would have to ensure that the goals it sets for itself are achievable. It is unlikely that many CDR approaches can develop into large-scale, commercially viable businesses within a few years — the commercialization pathway will likely take a long time. To help generate some quicker wins, a potential ARPA-C wouldn’t even necessarily have to fund technologies that are carbon negative today, as some of the companies with the greatest promise for negative emissions are only pursuing low-emissions (not negative-emissions) business models (like the direct air capture startup Climeworks, who has partnered with Audi to make carbon neutral synthetic diesel). If ARPA-C simply helps pave the pathway to a net negative carbon emitting economy, it would be a huge success in the fight against climate change.

And even a small ARPA-C (with a budget in the $100MM range) could have massive positive impacts for the CDR field. At this early stage, small projects have the potential to generate large returns in helping the field prioritize where to focus short-term investments.

So what is certain is that there is a great opportunity for an organization to kickstart the development of the CDR field today. And it’s not hard to imagine a new ARPA-C leading the way.

3 thoughts on “ARPA-C: How an Advanced Research Projects Agency for Carbon could Catalyze Development of the CDR Field”